The world leaders in brake upgrades for 4x4 vehicles

At Powerbrake we design and manufacture the very best brake upgrade kits on the market for 4x4 vehicles. All manufacturing, quality control and assembly is done entirely in-house. Our civilian X-Line 4x4 big brake kits feature direct technology transfer from our R-Line off-road race brake systems that have been used by works race teams to win multiple FIA Cross Country World Championships as well the infamous Dakar Rally, which is regarded by many to be the most gruelling motorsport event on the planet. 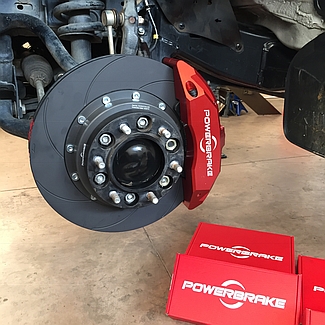 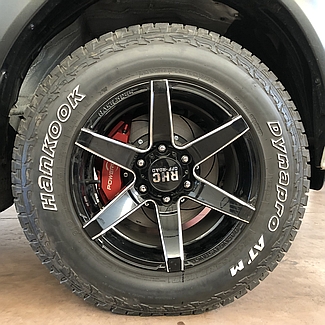 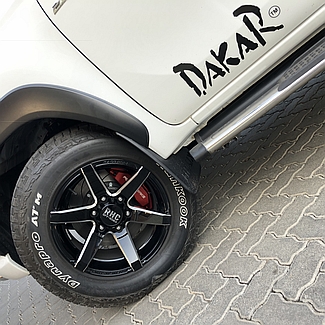 Our 4x4 and off-road race brake systems have proven themselves time and again in conditions ranging from the scorching deserts of South America, the Middle East and Africa to the snow covered forests of Northern Russia, to the fast gravel tracks of Mongolia. We export our 4x4 brake upgrades to customers in over 25 countries and pride ourselves in the uncompromising build quality of our brake systems. If you are looking to take the brake performance of your 4x4 vehicle to the next level, then look no further. Powerbrake are the market leaders in this segment. 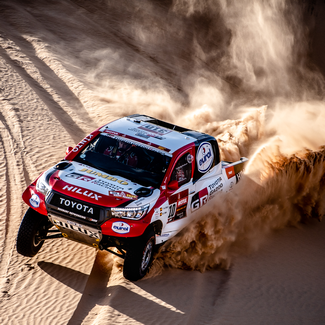 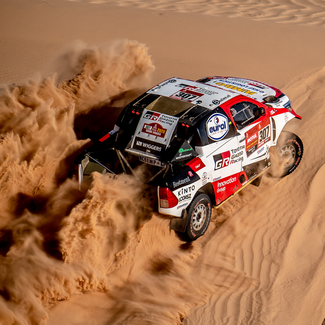 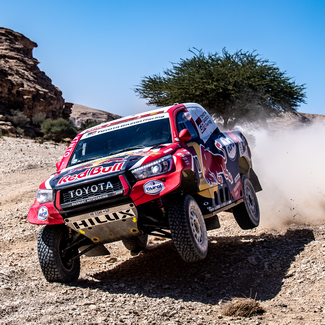 In 2009 Nissan Motorsport, who had run our X-Line 'circuit' big brake kits on Nissan 350Z's in their Bridgestone Production Car circuit race program, approached us to develop a 6-piston off road race caliper for a Nissan Navara being built by them to compete in the infamous Dakar Rally. At the time, Nissan Motorsport were dominant in the highly competitive Donaldson Cross Country off road race series in South Africa, with numerous national championship titles already achieved. Nissan’s Dakar race car would be based on the same car but the Dakar rules allowed for a higher spec brake system. Nissan had been using a cast aluminium, European sourced 6-piston race caliper during the early development of the Navara race car but felt that they wanted to consider other options. 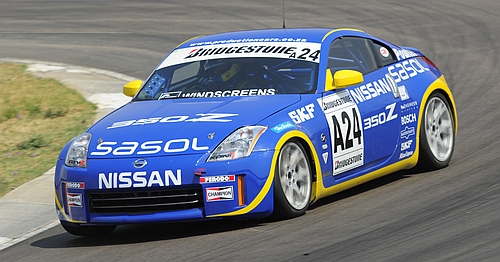 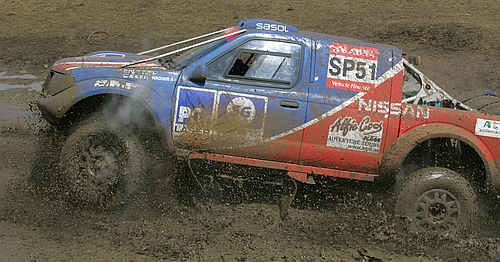 At the time Powerbrake did not have a purpose built off road race caliper in our range. Off road race calipers require vastly different design elements to circuit race calipers. These include having all internal fluid crossovers and recessed / hidden bleed screws in order to protect these items from the stone and rock impacts. The new caliper was designed from the outset to be extremely durable. Months later the first car set of Powerbrake off road race calipers (our 1st generation R-Line calipers) were delivered to Nissan Motorsport, who obtained special permission to test the new calipers in the local Donaldson Cross Country race series as part of their Dakar development program. 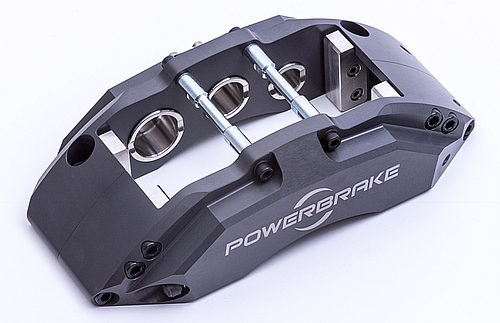 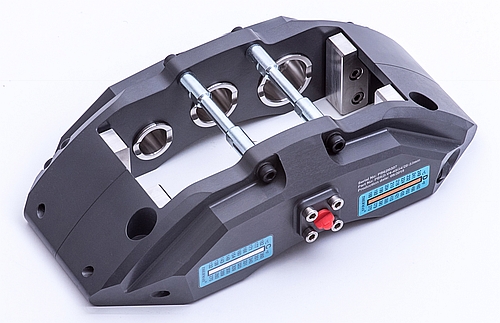 Feedback was positive from the team and drivers from day one. The 2010 Dakar Rally saw driver Alfie Cox running as high as 5th overall during some stages in the Nissan Navara. Nissan Motorsport used the Powerbrake R-Line off road race calipers again for the 2011 Dakar Rally with good results. Unfortunately Nissan Motorsport’s Dakar Rally program was shut down in 2011.

The story continues in 2012 when Toyota Motosport SA (now Toyota Gazoo Racing) was formed under the leadership of renowned motorsport engineer Glyn Hall. All official Toyota Hilux off-road race cars sold world-wide would be designed and built in this new state-of-the-art facility in South Africa. From the outset all Hilux race cars (both the factory cars and customer cars) were fitted with Powerbrake R-Line, 6-piston race calipers front and rear. Toyota Motorsport alone fitted hundreds of our original R-Line off road race calipers in the years that followed.

Our 1st generation R-Line caliper was supplied to some of the world's leading off-road race car builders as well as many speciality vehicle manufacturers (police, military and emergency services) world-wide with great success. The caliper proved itself over many years to offer exceptional performance and extreme durability in a compact package.

In 2014, Toyota Motorsport approached Powerbrake to develop a water-cooled version of our R-line off-road race caliper. The highly competitive T1 4x4 Dakar / FIA class in which they were competing specified small diameter 16” wheels (which limits max brake disc size to 320mm) and the cars were getting significantly faster year-on-year resulting in extreme brake temperatures and accompanying safety concerns.

In response Powerbrake developed our 1st generation liquid-cooled R-Line caliper. Closely based on our standard (air-cooled) R-Line caliper, the new caliper allowed for liquid to be circulated through the caliper body, cycled through a cooler and returned to the caliper in a closed-loop system. A temperature sensor in the caliper fed temperature data to the car's management system, allowing race engineers to program activation and deactivation temperatures as well as cycle times. 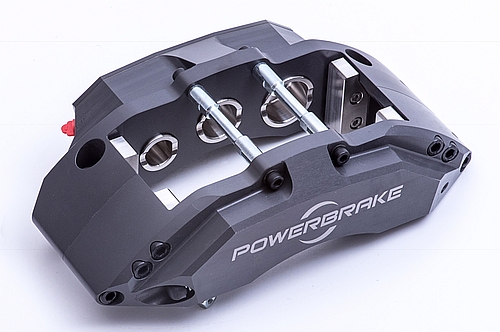 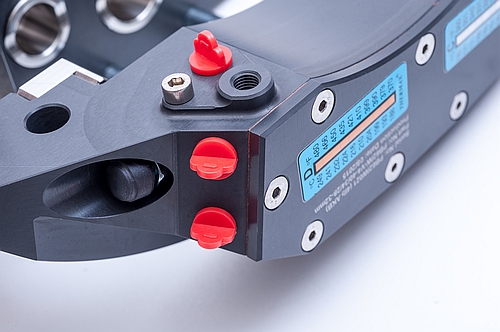 Powerbrake's 1st generation (air and liquid-cooled) R-Line off-road race calipers were used to win multiple FIA Cross Country World Championships, many SA National Championships and finished on the podium at the infamous Dakar Rally six times (including an overall Dakar Rally win in 2019), making them of the most successful off-road race calipers on the world market. 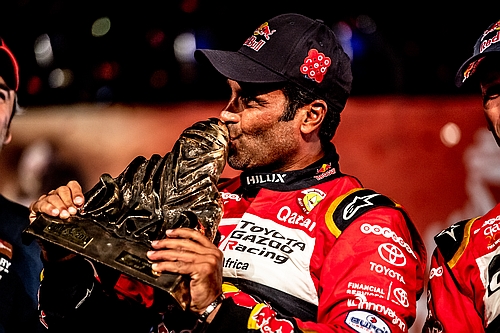 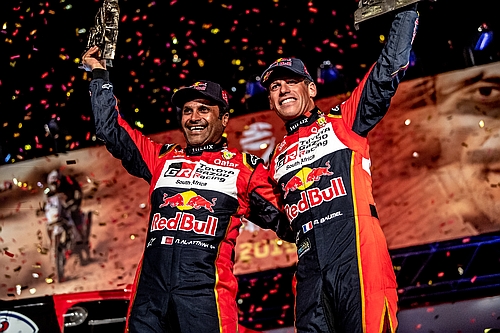 In 2019 Powerbrake launched our 2nd generation R-Line off-road race calipers both air and liquid-cooled variants. The new liquid-cooled R-Line caliper won its first FIA race (Rally Morocco) in Oct 2019 and finished the 2020 Dakar Rally in a close 2nd place on the podium. 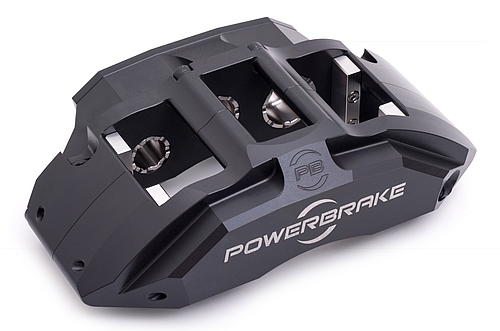 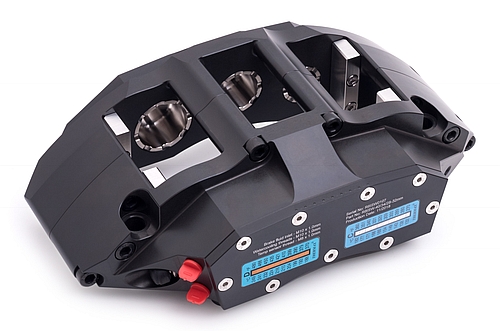 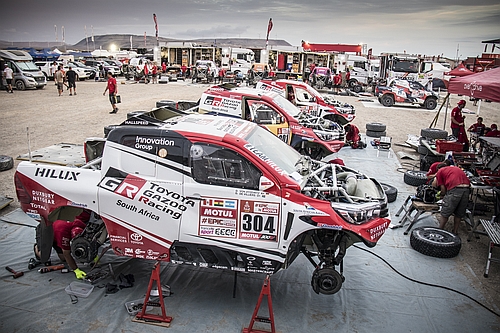 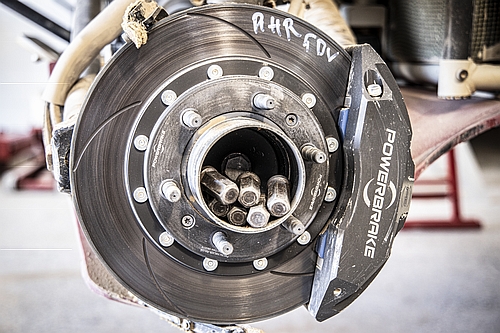 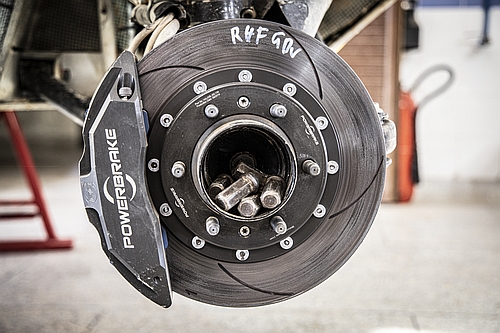 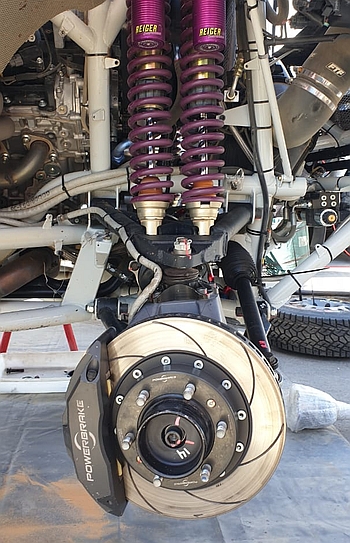 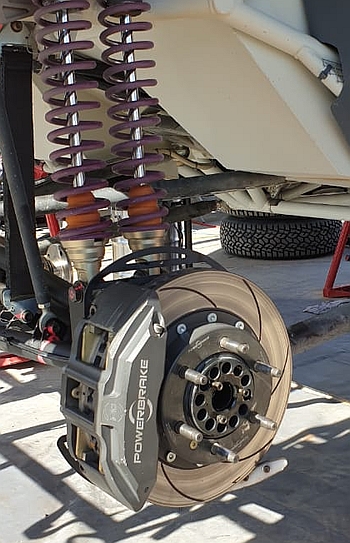 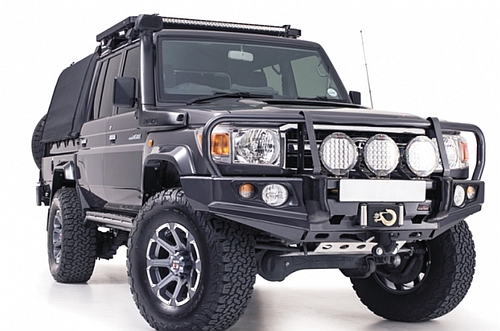 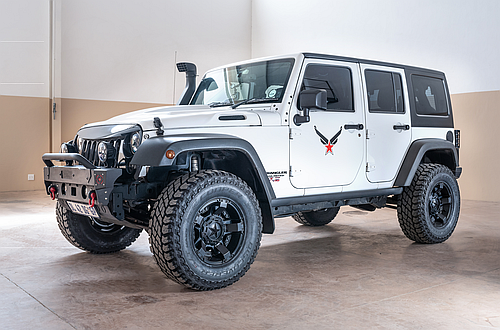 There were some drawbacks though. Our original R-Line caliper was designed around a race pad profile and therefore the range of brake pad compounds suited for civilian use were fairly limited. Also, as a race caliper, it did not include any of the noise abatement features included in our 'civilian' calipers. Furthermore, the maximum disc diameter useable with our original R-Line caliper was 330x32mm (FIA T1 off-road race rules specified a max wheel size of 16” when the caliper was originally designed). With many popular 4x4 vehicles running larger 17” or 18” wheels, customers were requesting big brake kits featuring discs in the 350mm diameter range.

So, in 2018 the Powerbrake engineers set out to design a new caliper specifically for the 'civilian' 4x4 market that was closely based on our world-championship winning R-Line 'Dakar' race caliper. The first task was to redesign the caliper internals to accept a commonly available street pad profile that would open up practically unlimited pad compound choices in high performance street and 4x4 pad materials. Next, attention was given to noise abatement features that would ensure quiet operation under daily driving conditions. 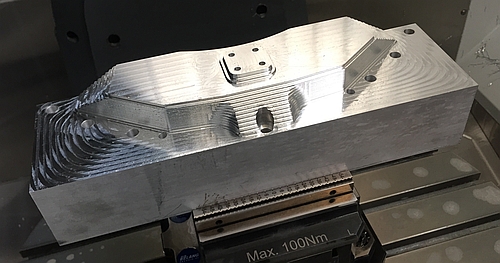 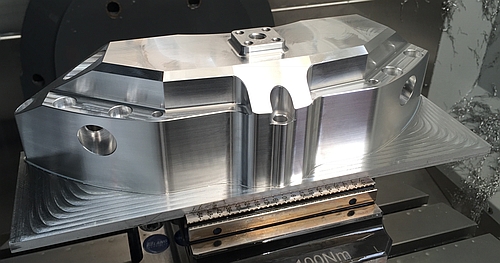 We launched the new Powerbrake X-Line 4x4 caliper in 2018. Designed for both street and heavy duty off-road use. The caliper formed the foundation of a new range of direct bolt-on big brake kits for popular civilian 4x4 platforms. The new X-Line 4x4 big brake kits sold well and customer feedback was very positive from the outset. 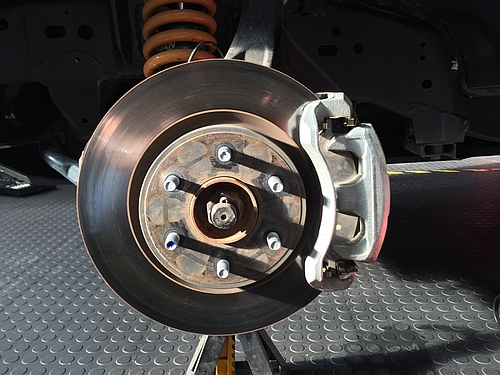 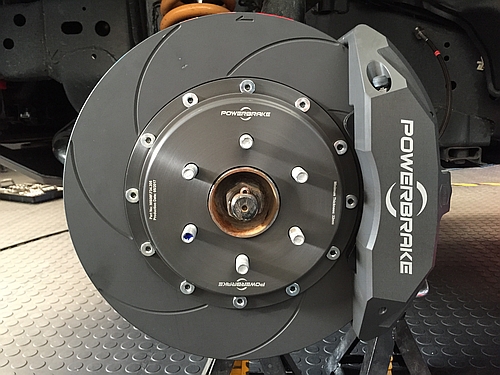 For 2020 Powerbrake has launched our latest range of X-Line 4x4 calipers that are lighter and have improved wheel clearance as well as a number of other enhancements. Our X-Line 4x4 big brake kits include: billet 6-piston calipers, high-performance brake pads, larger diameter discs, billet caliper mounting brackets and stainless steel braided brake hoses. Our latest X-Line 4x4 big brake kit range is the closest that civilian 4x4 enthusiasts can get to a 'Dakar' race brake system. If you are looking to significantly upgrade the braking performance of your 4x4 vehicle then look no further. Powerbrake are the market leaders in this segment. 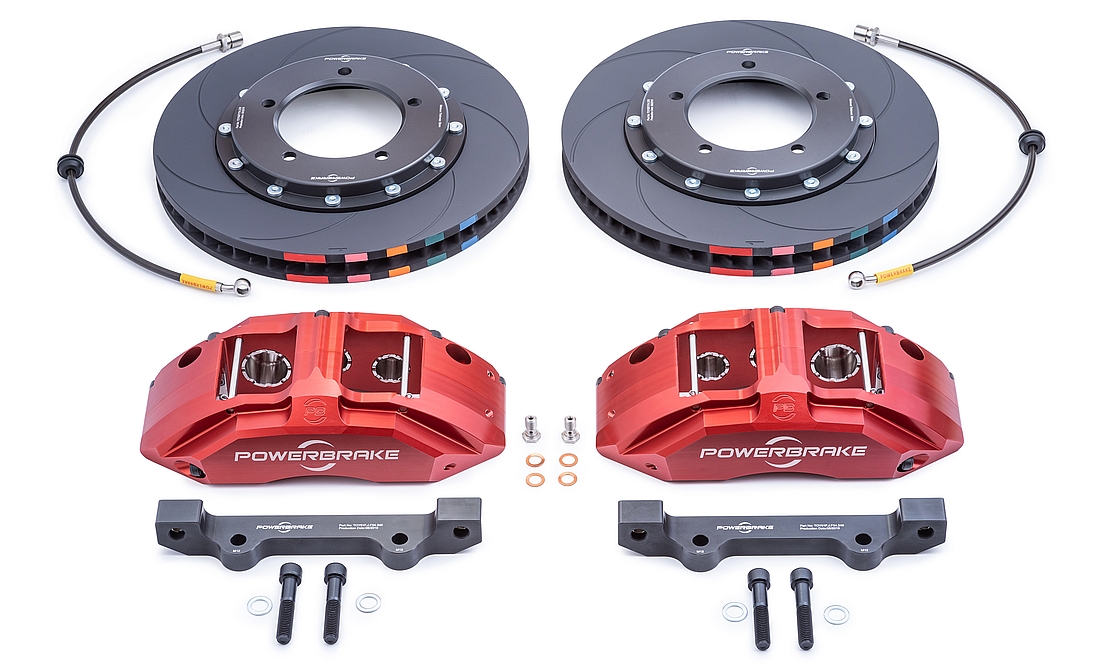 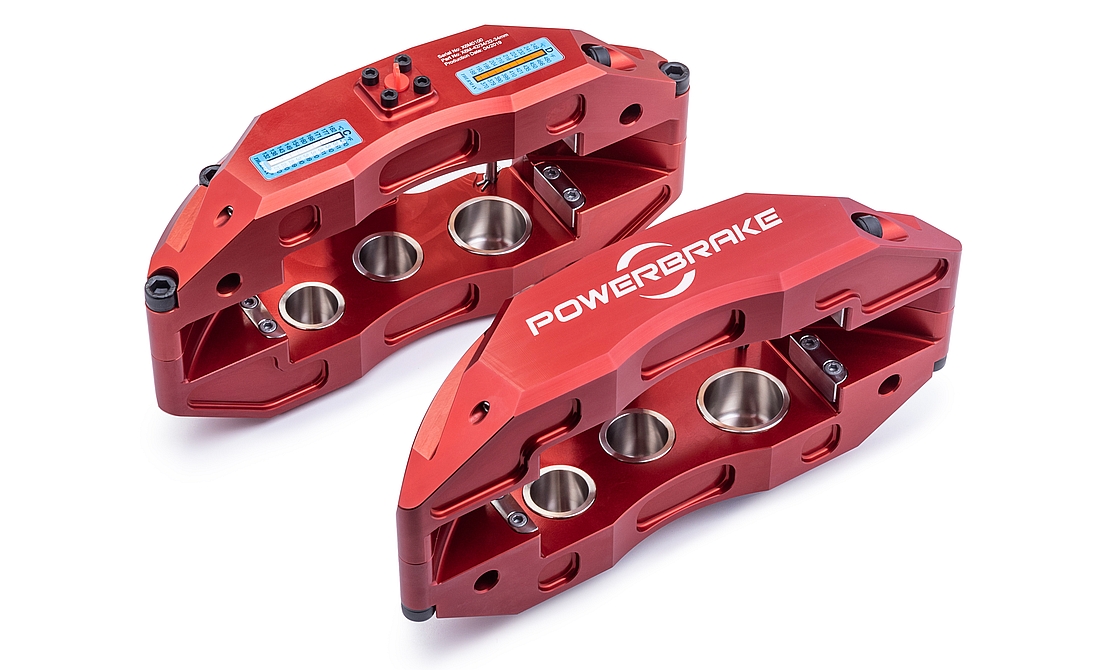